Help transform the lives of human rights defenders this Christmas

While we are free to express how we feel and what we believe, others are not so lucky. All around the world, hundreds of thousands of people are persecuted for standing up for their – and our – rights and beliefs. Many of these brave human rights defenders will be forced to leave their homes and families in search of safety. Some of these prisoners of conscience will find themselves in the UK where they can struggle to rebuild their lives.

This December, the British public can transform the lives of these brave individuals, thanks to the Big Give Christmas Challenge, which will double the value of all donations made to Prisoners of Conscience between 3 and 10 December.

Many prisoners of conscience in exile in the UK are highly qualified professionals who are not able to access employment in the UK because their qualifications are not recognised. As such, all the money raised via the Big Give Christmas Challenge will go towards the charity’s bursary scheme.

The bursary scheme provides grants to pay for post-graduate education and requalification at all levels and support prisoners of conscience back into meaningful employment, so they can be self-sufficient and make a positive contribution to society. For the academic year 2019/20, we have awarded bursaries to 13 recipients from eight countries.

Victoria from Zimbabwe was forced to seek asylum in the UK after she organised political meetings on behalf of an opposition party. Back home she was a teacher, but her qualifications weren’t recognised in the UK and she was forced to take a low-paid zero-hours job as a care worker. She was able to access a Prisoners of Conscience bursary grant to study a Masters in Public Health.

She says: “My life has changed significantly thanks to your belief in me and the opportunity and support you gave me. If it were not for your organisation, I would not be who I am today. I am a mother of three boys. Life would have been incredibly tough without your support. Your support enabled me to focus on studies and to forget about my having been banished from Zimbabwe. Prisoners of Conscience gave me a new life and I will forever be grateful.”

Gary Allison, chief executive of Prisoners of Conscience says: “Our bursary grantees all show tremendous fortitude, self-sacrifice and courage both in standing up for human rights and for the courage shown in their ambitions to requalify in the UK. We are delighted to be able to support them. However, this important work is only possible thanks to the generosity of our supporters. Without you, we wouldn’t be able to do any of this.”

For example, for every £10 that is donated online, Prisoners of Conscience will receive £20. For every £50, the charity will receive £100. One donation, twice the impact. 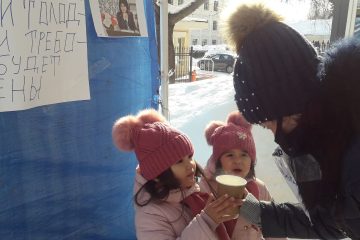